Our next port of call was Alani's, whose flamboyant front-of-house person also designs the shoes. We ripped off our sensible, dodge-the-potholes-and-dogshit BA pavement shoes and began trying on. Madam was hyperactive and attention-seeking but it was all good fun. Until she held out a pair for S to try. S slipped one on, shook her head: "No, they don't suit my foot." Madam tossed her head. "I make shoes for dancing, not for queens!"
We discovered later that the appropriate BA response to this kind of verbal assault is to toss one's own head even more haughtily and declare, "I am a queen."
But since we're New Zealanders, jaws dropping and faces flushed with outrage, we left the shop. Never to return for the very nice salmon pink sandals that had caught my eye.
Flabella's, just around the corner, was near capacity with prospective early-evening buyers and encroaching stacks of shoe boxes. C had already been waiting 25 minutes for someone to produce something in her size when S and I arrived, freshly insulted from Alani's. The head honcho was taking up more his share of tight space. He flounced about theatrically in his perfectly tailored pale suit, kissing the hand of every woman who came in and lavishing all-purpose compliments on any female within earshot. I took him outside to show him a shoe I wanted to try, but he was so busy getting his hands on me that I wasn't confident he heard a thing. When I tried to explain that I had a bunion which might cause difficulties, his adoration knew no bounds: "I love you! I love your juanete!" he crowed. Not enough, however, for these shoes or any others to be fetched from wherever they had to be fetched from in the next 20 minutes.
Flabella's website claims that only 20 pairs of shoes are finished every day and since there were at least 21 potential buyers in the shop ... well, you do the maths.
C had already left in disgust. We found her across the road in Scarpe Mahara. The shop stocks tango and street shoes designed to be stylish and comfortable (sorry, they don't have a website, nor are they interested in selling long-distance). The middle-aged couple aren't all over you like a rash, but do seem to be in the business of actually selling shoes. In spite of the language barrrier, C was making more headway here than we'd managed to make anywhere else. The upshot was C - one pair, Jane - two. 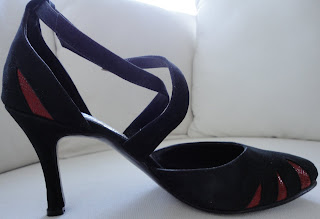 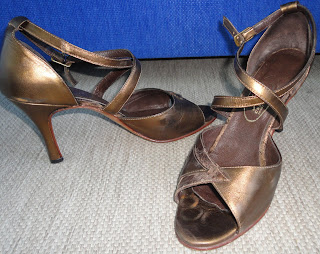 The gold ones I wore that night and immediately forgot I was wearing new shoes. They're a dream. I love the black and red, too, and had been specifically searching for some with closed toes, but their slight pointyness will take a little more getting used to. The heels of both are perfect for me.
C's were classic 30s numbers in black suede, with a lowish heel and thin double instep straps. She liked them so much she went back for another pair.
Nothing, so far, had either appealed to or fit S. That might have been because, in her heart of hearts, she was hanging out for Comme Il Faut. About which, more later.
Posted by Plain Jane at 9:04 PM 1 comment:

Every tanguera who visits BA has shoes on her mind. Accordingly, the three of us set out to find our fantasy shoes at what reliable sources assured us would be a fantasy price. The Faithful Reader might recall that I was pinning my hopes on Darcos. The reality was profoundly disappointing.
We found their "megastore", where craftsmen were working away at the back, and we fell on the shoes. These were arranged on racks according to size, but ours - 39, 40 and 41- were nowhere to be seen. Neither, apparently, were we.
The one or two assistants completely ignored us, until we finally bulldozed our way into their consciousness with a request for our sizes. No eye contact, and a dismissive wave towards the gloomy interior was all we got. There we found a couple of meagre racks of footwear for giantesses suffering from the delusion that they deserved decent tango shoes.
A day or so later we visited one of Darcos's normal retail outlets, in the hope of more choice and better service. Again we were dismissed with a wave, and when one of us dared to pick out a shoe from the 36 rack and ask if it came in a 41, the gesture was repeated. It might as well have been two fingers.
On the way out, I snapped this surreptitous picture of the couch, where, if you're lucky enough to get to the point of actually trying any of their shoes on, you will be invited to sit. It probably tells you all you need to know about Darcos's customer relations. 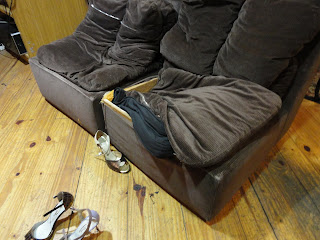 To be continued.
Posted by Plain Jane at 9:54 PM 2 comments:

What to wear to the end of the world 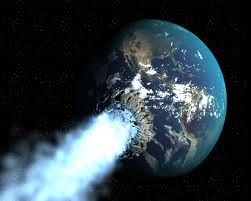 Preacher Harold Camping predicts the Second Coming of the Lord at 6pm 21 May. Given the man-made dictates of latitude, that's tomorrow New Zealand time. Only 2 per cent of us will be Raptured to Heaven; the rest of us will go to Hell (sorry about the caps: this sort of talk tends to bring them on).
So what should one wear? The question is made more challenging by not knowing in advance which particular party one will be joining and the fact that Rev Camping hasn't, to my knowledge, published any kind of dress code.
Hell has always sounded lively but ... well, pretty Hellish. But spending the Hereafter with the Right Reverend and his disciples (who presumably include God) wouldn't be my idea of Paradise either. Heaven as a particularly drawn-out Rotary Club function, to which business suits will be worn.
Right now, I'm in my favourite writing gear - dressing gown and slippers, and  this seems to me as good an outfit as any to face Eternity. Comfortably unrestricting yet decent, and easily washable. One imagines Heavenly standards of hygiene to be pretty stringent, while in the Other Place there will be a good deal of sweating going on.
But wait - I've just realised ... at the moment the final thunder clap is due, I shall be taking part in the dance contest at the Southern Cross pub, and in tango gear. So if by some fluke I initially make it to Paradise, Rev Camping will take one look at my short skirt, high heels and lipstick, have a quick word with God, and banish me to Hell. Where I shall be the only one without a partner and the tanda will never end. 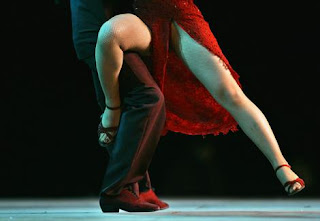 Posted by Plain Jane at 3:06 PM No comments:

Labels: end of the world, God

Before I left home three weeks ago, I fondly imagined I would be posting from Buenos Aires at the rate I do from here, on all manner of appearance- and tango-related topics, liberally spiced with on-the-spot pictures.
Huh. I was far, far too busy doing it all to record any of it. All I managed was this list of blogs-to-come: