The happy bride and groom 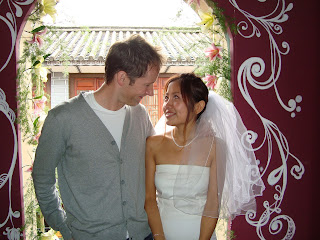 The weepy mother and sister 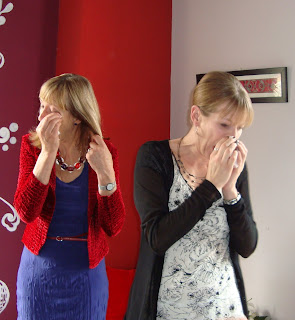 Why do we weep at weddings? "We" being those of us who routinely refuse to have our tears jerked by any number of sentimental strings.
Yes, it was my son and her brother, and look how grown up he'd become, and what a beautiful young woman had agreed to be his wife. I suspect, though, that what reduced this Greer-defined crone to near-sobs and strenuous nose-blowing was witnessing the please-God, not-too-ephemeral triumph of hope over experience.
I'll be back with some observations on the event's sartorial aspects when I've located the tissues.
Posted by Plain Jane at 6:33 PM 3 comments:

A chink in the firewall

It's raining and chilly here in Dali, and upstairs on the balcony, overlooking the courtyard of the Jade Emu hostel, the wedding party are rehearsing. The celebrant, Phil, is a Kunming karate teacher, with a sideline in sausage-making. S and I brought cool weather clothes from home, but, in our effort to pack light to come to Dali, left it all in Kunming. Hopefully the venue will be warm.  The Jade Emu hostel is much nicer than it sounds.  Clean, bright and friendly, and full of character. They've stuck a red good luck decoration on the main gate, and blown up red balloons. If I could locate my card reader, I'd post some pictures. Maybe later.
Posted by Plain Jane at 7:59 PM No comments:

The Great Firewall of China will prevent me blogging for the next three weeks.

When you've done that, you can cheer yourself up by going here http://www.shanghaitang.com/ to Shanghai Tang - fashion as chic as it gets anywhere. 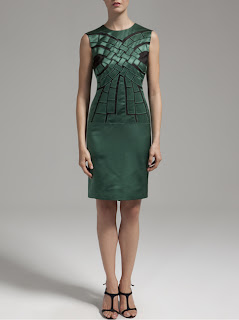 Black is still the new black

Although I won't be wearing black to The Wedding, I agree with Coco Chanel when she said, "Black wipes out everything else around." Or do I? Perhaps what I really mean is that - despite all sorts of pressure to abandon it - I feel great in black. Which might be quite different to looking great.

Back in the 80s, when I had a good deal less confidence and money than  I have now, I attended a formal dinner wearing a white shirt with a black jacket and trousers and a black tie. I felt pretty cool. Until my neighbouring guest informed me helpfully over the entree that these weren't "my colours".  She'd had hers done (thank god that dogma has had its day), and, because her colouring was similar to mine, I should have been wearing pastels. She was sporting something ladylike in apricot. I wouldn't have been seen dead in it.

Then there's the omniscient and all-knowing Trinny and Susannah. They've repeatedly denounced black. For us lot, anyway, although T herself doesn't seem averse. Here she is out shopping in London a couple of years ago, head to toe in black and, it has to be said, looking great.

Do you remember back when they (whoever they are) announced that brown was the new black. God knows, they tried. All you could buy for a year or two in the way of jackets, shoes and skirts was brown, brown and more brown. What a recipe for visual depression. Black-lovers simply rode out the brown fad, and sure enough, it passed.

T and S seem to assume that women wear black because it's slimming (which they deny). But that's not it. Black - there's no other way to put this - has power.  I don't feel like my own woman in pastels. Don't feel like anybody's woman, in fact.

E - a snappy dresser from way back - says Chanel is right about black, "but you do need a good night's sleep, which at my advanced age, you don't always have:


You put me in mind of the first ever Trelise Cooper dress I had way back in the 1980s when she had a small shop in High Street, Auckland, and no one had heard of her. It was black with long sleeves and a swirly skirt and HUGE shoulder pads and I used to wear it with a wide gold belt. It was super and stupidly I seem to have offloaded it on the way – probably when shoulder pads became a no-no.

Shoulder pads had a lot to answer for.

Here's one of CC's ground-breaking little black dresses from 1927, held by the Metropolitan Museum of Art, New York. 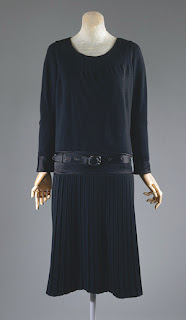 It represents, says MoMA, "one of Chanel's most popular and enduring contributions to women's fashion:


In all of its layered details, a simple material, wool jersey, becomes elegant through superior tailoring technique. Couture details such as seam binding, carefully arranged pleats, the finely finished hem of the skirt, and hand-sewn belt make this ensemble an example of Chanel's characteristic poverty de luxe, an expensive interpretation of a simple design made of modest materials. Chanel appropriated tailoring details from riding habits, men's wear, and service uniforms in her quest to reduce and refine women's clothing to its simplest and most elegant.

You heard it here first ... well, second, actually. This morning's Dom Post reports that that retail shrine to British commonsense, Marks and Spencer, is about to thrust onto the market something called a "frontal enhancement garment". For those whose first language isn't M&S, this translates as knickers that make your package look bigger. Thirty-eight per cent bigger, according to reports, although god knows how they arrived at this degree of precision.

They'll sell for around NZ$21. And you'll also be able buy bum-lift knickers. I can imagine some men being eager for both enhancements, but the only way to get them will be to wear two pairs of undies at once. Why didn't M&S design them as one?

Women routinely buy and wear wired, push-up, padded bras. Not to mention those stretchy cast-iron garments that "control" you from from mid-thigh to chest. Men just want the same, it seems. Or M&S hopes they do. Which is the way of our glorious capitalist system - create the thing and desire for it will follow.

It once more raises the question of who we dress for. Men dressing for other men will possibly flock to M&S for both products. Men dressing for women might too. They'd be misguided, though, in any belief that this will make the difference between pulling and not. When, lady readers, was the last time you decided it was all on with someone by sizing up their crutch? Their arse, now ... that's another story.

But then, so the argument usually runs, women buy underwear to make themselves feel good, not primarily to attract a mate. Perhaps it will prove the same for men. A bigger-looking bulge equals more confidence equals more success.  Why do I feel like sighing?
Posted by Plain Jane at 12:37 PM No comments:

The suitcase is open on the spare bedroom floor and enough stuff - clothes, shoes, accessories, books - for three months is spread across the bed and table. I'm going away for three weeks so much of this will be left behind. This is my preferred method of packing. 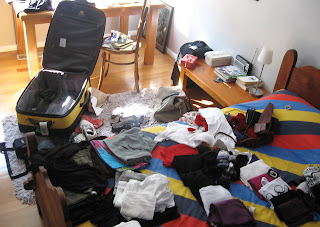 I always hate the way people pack in movies - striding about their bedrooms, whipping open drawers and cupboards, flinging things blindly into cases. They're usually upset when they do this - due to a marital infidelity, a pursuing serial killer or a determined police officer - but really, their new life isn't going to be any better for having taken a load of unwearable items and overlooked the one or two that would pull the rest together.

I've no such excuse and I want to get it right. I'm going to China for son J's wedding then on to Vietnam.

It's my fourth visit to China. I first went for the weekend in 1987. I was in Hong Kong for work and, instead of doing whatever it was we were meant to be doing, the photographer and I bunked off to Guangzhou. I didn't go back to until 2007, when J was living in Urumqi. (You can read about that trip here.)
J and S were living in Kunming when I returned in January this year and still are. Technically, they're already married, having registered in Urumqi, so this is the after-match function. It will be held in Dali, a charming old town we visited in January. This was the view from the hotel entrance. 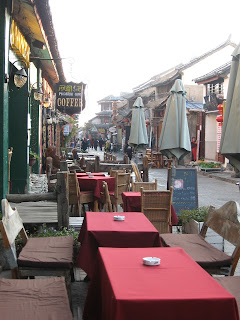 This time, of course, there's the question of what the mother of the groom will wear. The odd (very odd) faithful reader might recall my account of a Skype conversation with J on this subject. I'd just bought a black Karen Walker cheongsam-inspired dress, which for a while I pretended to myself would be just the thing. But it's not - you don't wear black to Chinese weddings. I'd look like the Angel of Marital Death. So I have something else. More of which another day.  Meantime, here are some wonderful images of what I won't be looking like. 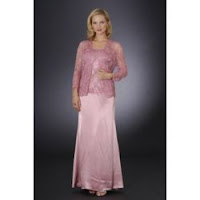 Then there's the Vietnam leg. It will be hot, and since the plan is to drive to the border and walk across, we shall have to pack light. Each time I travel I think I can do this and each time it turns out that I can't. Yet I still have this fantasy of stepping lightly off a plane in the middle of nowhere with just a carry-on. I was going to say that at least I won't have to take tango shoes and dresses, but that's hardly a plus.
Posted by Plain Jane at 9:53 PM No comments:

Four Sydney women recently broke the world stiletto sprint record.  Click here  then scroll down to watch them go.  Heels had to be at least three inches high, and legs (for some spurious reason to do with hair's breadth wins) had to be freshly shaven.

S suggests Wellington tango women would be up to fielding a pretty good team if the event is ever repeated. But then she's the only person I know who wears higher heels in real life than she does for tango.

Posted by Plain Jane at 4:11 PM No comments:

Yellowish stuff doesn't suit you so don't buy it. Here's one such mistake - a Roisin Oubh dress that hung in my wardrobe, largely unworn, until I handed it over to Deb in Madison Rose the other day. Now it's part of her window display. 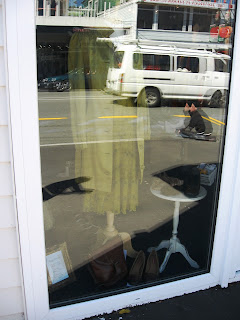 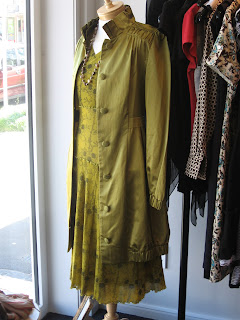 (Yes, I know the top image is technically challenged but I like it.)

Also on Deb's racks, and also largely unworn, a relatively expensive Ruby tee-shirt - long and stretchy and shiny and gorgeous, but uh-oh, a creamy gold, which instantly transformed me into a victim of liver disease.
Posted by Plain Jane at 4:32 PM No comments: 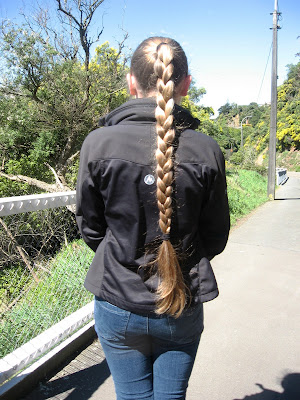 Nyere has had her hair cut once in her 12 years. Not only is it long, though, it's strong and gleaming, right to the end of her lovely plait. I saw her walking down the road with her mother and leaped from the car with my camera.