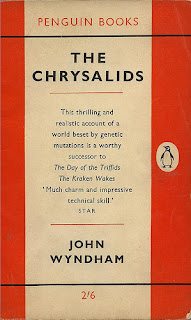 If you know where The Fringes are and who lives there, you're probably a John Wyndham fan. I became one in early adolescence, when my father handed me a battered Penguin copy of The Chrysalids from his own bookshelf. I swallowed it whole, and read it several times more in the next few years, along with The Day of the Triffids, The Midwich Cuckoos and The Kraken Wakes.
It's a marvellous book, guarranteed to appeal to adolescents going through that "why am I so different to everyone else?/I must be adopted" stage.
You can find a detailed plot summary here. All you need to know for present purposes is that The Chrysalids is set in post-apocalyptic Labrador. Here, a small group of survivors adhere to a harsh fundamentalist doctrine that sees transgressors exiled to - yes - The Fringes. And it all it takes to be cast out is to be revealed as deviant from a tightly defined genetic normality.
Ten-year-old David is the son of a pious and powerful patriarch. He therefore keeps quiet about his strange recurring dreams of a beautiful lighted city and horseless carriages. However, he and a few other young people discover they are carrying their own blasphemous deviation - the ability to read each other's minds. Soon, they are forced to flee to The Fringes themselves.
Eventually the group is rescued - by a woman who contacts them telepathically from a far-off place called Sealand. When they reach it, David recognises the place of his dreams.
My father told me this place was New Zealand. As we were still living in England and I knew nothing of parental plans to emigrate, this was of little interest to me.
What made it of complusive interest was that I was a deviant myself. The medical diagnosis is that my right ear lacks the usual cartilege folds, which means it's shapeless and prominent, like the one on the left. 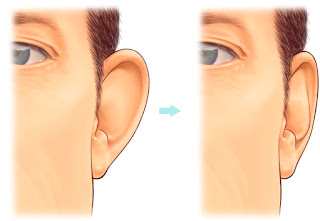 And what got me thinking ears was my recent blog on resumed ponytail wearing. I said that:


one of things I hated back then, apart from lack of ponytail perkiness, which was closely correlated with popularity, was that girls sat behind me in class playing with it and boys whizzed by in the corridors and playground and pulled it

I quite forgot the thing that I hated more, the thing that lay behind my dislike of any attention paid to my hair: how heartlessly a ponytail revealed my deformity.
I wasn't teased or bullied about my ear, but, from the day I changed from plaits, which hid the ear, to my ponytail, I was subject to helpful observations along the lines of "Your ear sticks out", and innocent inquiries, like "Why does your ear stick out?"
My mother had asked herself the same thing. Apparently I spent the first few weeks of life with the offending ear sticking-plastered to my head. Until some medico pointed out that this was never going to fix it, that it would take an operation to do so. Someone - perhaps the same health provider - told my mother there was no point doing this before I was 14, since it might just revert. But when I got to 14 and 15 and 16, my ear was the last thing anyone was thinking about. Instead, we emigrated en famille to New Zealand.
Only on bad days does it seem like The Fringes; mostly, it lives up to the promise of Sealand.
Posted by Plain Jane at 4:57 PM